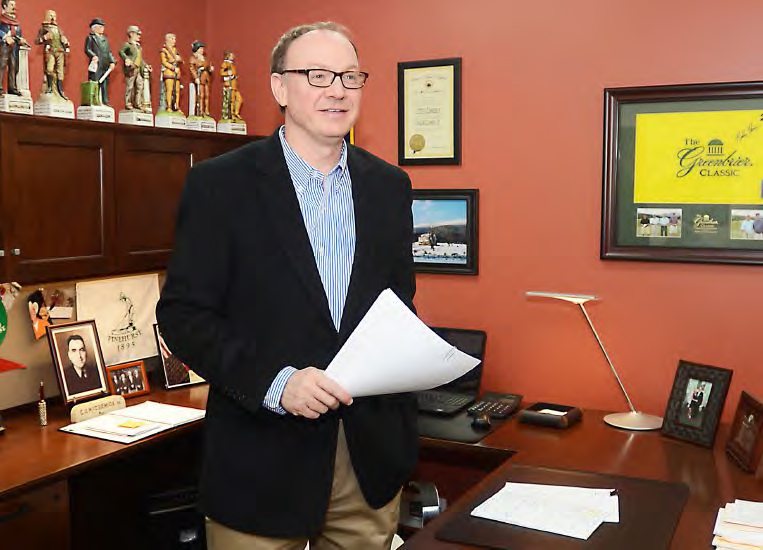 Omega Commercial Interiors has been added to the annual business honor roll of the Morgantown Area Chamber of Commerce (MACC).

BY CONOR GRIFFITH
Four local employers —Document Solutions, Wedgewood Family Practice and Psychiatry Associates, BrickStreet Insurance and Omega Commercial Interiors, have been added to the annual business honor roll of the Morgantown Area Chamber of Commerce (MACC).
They will be recognized during the annual MACC Awards Dinner today.

Small business of the year

Opening its doors in 1985, Document Solutions on Mileground Road is an office equipment supplier specializing in Xerox products along with MakerBot 3D printers. It has been named Small Business of the Year by MACC.

Owner Bob Klein said Document Solutions supplies everyone from one-man operations all the way up to Morgantown Printing and Binding, Mylan Pharmaceuticals and Mon General Hospital.

“I grew up in Point Marion. My family had a business there called Klein’s Department Store. They were in business 77 years, ” Klein said, adding that his family’s store was where he learned the meaning of service and quality. “Being in business here in Morgantown and being associated with Xerox, other than providing an income and putting three children through college, it’s the friendships and contacts I’ve made that are unbelievable.”
Klein said he’s been associated with Xerox for more than 40 years and his wife, daughter and son are also active with Document Solutions.

Medium business of the year

Wedgewood Family Practice and Psychiatry Associates was named MACC’s medium business of the year.
The practice opened its doors on Wedgewood Drive in 1979 before moving to its current site on Van Voorhis Road four years later. The practice now boasts four sites around Monongalia County, 14 physicians and provides care to more than 20,000 patients throughout north-central West Virginia.

CEO Frank Ortiz said the honor belongs not just to the practice but to the patients and employees who have stuck by them through the years as the business grew.

“It’s been a great ride for everyone,” Ortiz said, “from those physicians and others who have come and gone to go from basically a mom-and-pop shop to a full-fledged medium business that still feels like mom and pop’s.”

Large business of the year

The chamber bestowed the title of Large Business of the Year to Charleston-based BrickStreet Insurance.

In 2006, West Virginia Employers’ Mutual Insurance Co., doing business as BrickStreet Insurance, became the first private company to offer workers’ compensation in West Virginia’s history. A later study by WVU found that the company directly and indirectly contributed more than $560 million and 3,500 jobs to the state’s economy in 2007.

“We are honored to receive the 2017 Large Business of the Year Award from the Morgantown Area Chamber of Commerce. We value the recognition of our work and the community for their support. Our success is a tribute to the business community in our great state. We are proud to be headquartered in West Virginia,” CEO Greg Burton said.

New business of the year

Omega Commercial Interiors was named 2017’s New Business of the Year by Morgantown Chamber of Commerce.

Owner David McCormick said Omega opened in 2013 and has tripled in size since opening, and plans to expand to a new facility this year.

“We’re flattered and thrilled at the award simply [because] there’s so many deserving small businesses in our area and to be chosen as new business of the year attests to our business model, our staff and how hard everyone at Omega’s working,” he said. “We have great customers and it’s just very flattering.”

McCormick said he is proud that his company contributes to the local economy and throughout the state, and emphasized the importance of buying local.

In 2015, Omega Commercial Interiors on Hartman Run Road in Morgantown received an award from Kimball Office, its main supplier, designating the firm as a “select dealer” —one of only 32 in the nation.

According to the corporate web site, local owners David McCormick Jr. and Peggy Schifano Lovio, along with their associates, have about 60 years of combined experience in commercial office furniture and interior consulting.